Caring and Raising Awareness for our Oceans

Mermaid Melissa LLC is involved with several charities and events to raise awareness for the ocean and even had the opportunity to work for the gulf coast clean up project. Their next goal is to produce a public service announcement about ocean pollution where a girl is on a beach and a newspaper with devastating environmental headlines is flipping in the wind, mentioning the terrible conditions of our ocean. The girl is obviously emotional about the beach conditions and the newspapers article describing the extinction of whales and dolphins. Next, the camera pans wide and reveals it is actually a mermaid covered in oil and not just a girl. The tag-lines would be, “we can’t let our dolphins become just another myth” or “if we lose our oceans, we lose more than just our imagination…”

“We are passionate about our beautiful planet, education and bringing those two passions together and our commitment is a lifestyle. I hope these small but genuine attempts at making this world a better place will be recognized as I aspire to become an ambassador for our oceans.” 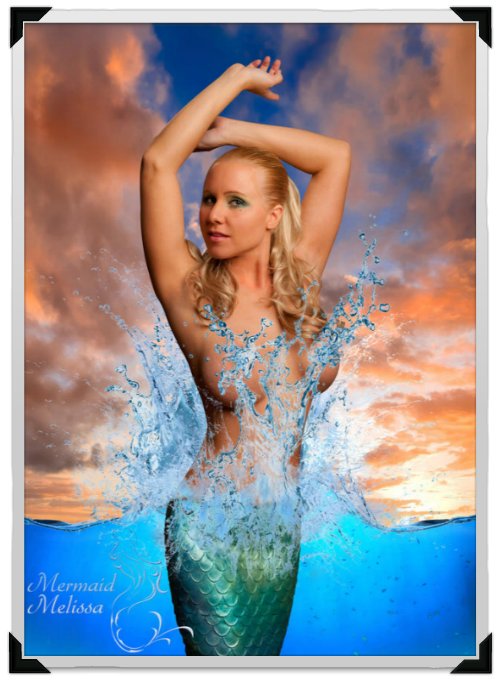 “I have spent my entire life around the water, dreaming of being able to connect on a deeper level with the ocean. Growing up off the coast of Saint Augustine, Florida visiting Marineland weekly as a child, raised on a farm, tending to the animals, -it seems only natural that I would end up in a career field that also lets me live out my passions of being around the creatures of the sea. Over the next several years I worked with a variety of animals for Universal Studios Animal Actors Show, on the set of movies, & a promotional model in LA. In 2005 I began my career at Sea World Orlando as an animal trainer working with killer whales, dolphins, and as professional pearl diver. The abilities perfected in the water started the nick name “Mermaid Melissa” because of my 4:18 breath hold, dolphin kick as I swam, and for being creative with new movements swimming in front of the crowds. Since my experience has grown leaps and bounds with traveling worldwide for projects and companies, the unique skills as a mermaid continue to grow.”

For more information about Mermaid Melissa please visit one of her links below:

USPS packages may require more time to be delivered due to limited transportation availability as a result of the ongoing COVID-19 impacts.

Shipping via USPS Priority Mail has been extended to 3 and 4 days. For faster service select Priority Mail Express Service, which guarantees overnight service (one to two days depending on location) or select a UPS option.

Refer to “Press Set-Up Charge” on ordering page.
A press ready file must follow all specifications located on our FILE PREPARATION page. If in doubt, email file and we will preflight to let you know.

Artwork if under 30MB may be emailed to art@waterproof-cards.com

Our Synthetic Paper is a recycle category 5 product.
Please note that “waterproof” and a recycle symbol is added small to the back side of your job. This is done as standard practice which helps with environmental awareness and separates this eco-friendly & waterproof product from others that are not.

© Copyright 2020 Waterproof-Cards | A division of The Vault | All Rights Reserved.